Pete and Sam Carlino controlled the flow of alcohol from Southern Colorado to Denver from 1922 to 1931 during prohibition. Their liquor empire did not come without a cost. The Carlino brother’s would battle their own kin in the Danna family to secure Southern Colorado’s bootleg liquor territory. Dozens would perish on their rise to power. Mafia boss Nicola Gentile would be called upon to settle a dispute involving the Carlino Brother’s associates.

Author Sam Carlino is Pete Carlino’s grandson and gives new insight and information in his investigation into this well chronicled story. Newly uncovered confirmation that Pete Carlino met with Salvatore Maranzano in New York and that the death of both men on September 10, 1931 may have not been a coincidence. Intimate photos and brand-new revelations are revealed about the Carlino brothers and their associates during their ten year rise to power and their gruesome bloody demise. 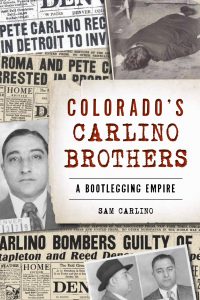 How did these trunks, filled with family treasures, help lead to the downfall of the Carlino Brothers?

Grandson Sam Carlino reveals the truth about this and other matters never-before-disclosed.

Welcome! If you're here to purchase the book,
Colorado's Carlino Brothers: A Bootlegging Empire,
you're in the right place.